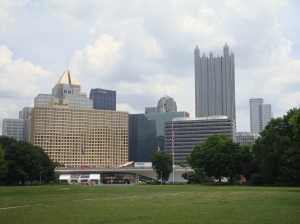 The $38 million independent boutique hotel will be housed in the Granite Building, a Romanesque-style structure built in 1889 and site of the former German National Bank. A building next door that once housed an Arby’s restaurant also will be part of the development.

The project is being developed by Holly Brubach, a former New York Times style editor who bought the Granite Building in 2006 with the intent of turning it into condominiums.

But that project was done in by the recession, prompting Ms. Brubach to change course.

As usual, one bad apple…  A joyous annual event, eagerly anticipated by Pittsburghers, was tainted this evening.  During the fireworks a shooting occurred.  A man was shot and wounded at the corner of Smithfield Street and Liberty Avenue.  During police questioning, an unruly crowd gathering in front of the Wood Street subway station and a fight broke out.  35-50 people were arrested.  K-9 units were called in and pepper spray was used.  After an hour and a half, order was restored.

Kudos to the Pittsburgh Police Department for quickly restoring order!

Shame on the n’er do wells for trying to spoil a downtown holiday event that 200,000 people were expected to attend!

The holiday events continue all day tomorrow.  For details: http://www.thepittsburghchannel.com/entertainment/1038754/detail.html

This link shows some great pictures of downtown Pittsburgh at night, all lit up…there are several pictures with Christmas decorations and the Christmas tree in Point State Park lit up for your enjoyment!