The draft document — an update of a 2009 plan to decrease greenhouse gas emissions in the state — comes out of the Department of Environmental Protection. It’s based on workplans recommended by a 15-person committee representing industry, government and nonprofits.

The legislation that required this report said the update should have been issued at the end of 2012.

The latest climate action plan proposes expanding natural gas distribution pipelines to give more Pennsylvanians access to the fuel. It also advocates encouraging operators of coal mines to capture some of the methane vented into the air before, during, or after mining activity. 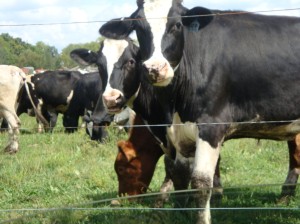 Dairy farmer Ron Koetsier’s 1,200 cows produce roughly 90 tons of manure daily, and for the last three decades, he has tried unsuccessfully to turn the stinky dung into energy to power his 450-acre farm in Visalia.

He installed a nearly $1-million renewable energy system in 1985 that used the methane from manure to create electricity for his farm.  In 2002, he replaced that system with newer technology, but he hit a snag when air-quality standards called for expensive retrofits to reduce air pollution; he eventually shut down the system in 2009.

In a few weeks, however, Koetsier’s renewable-energy efforts will get a reboot as a new company replaces his current system with one that is expected to satisfy strict air standards in the highly polluted San Joaquin Valley.

A decade or so ago, dozens of California dairy farmers built million-dollar systems called methane digesters that convert manure into power.  Then, unexpected pollution problems, regulatory roadblocks and low rates of return killed most such digester systems, leaving only a handful in operation.