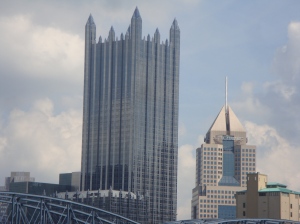 “With more than $5 billion of transformative investment in Downtown Pittsburgh over the last decade, Downtown is well-positioned,” said Jeremy Waldrup, president and CEO of the nonprofit Pittsburgh Downtown Partnership.

The housing boom rolling across central Philadelphia showed no signs of weakening last year, according to data released Tuesday, but a population exodus could be on the near horizon if little is done to fix the city’s schools and tax structure.

The news was mostly positive out of Center City District’s annual housing report, which found that 1,983 new apartments, condos, and houses between Girard and Tasker Avenues, and the Schuylkill and Delaware River hit the market in 2014, thanks to an influx of empty nesters and young professionals, said CCD chief executive Paul Levy.

That number was down 8.5 percent from the record-breaking 2,168 logged a year earlier. But Levy and his staff concluded that demand for the torrent of new construction of homes and apartments would be strong for at least several more years.

Fred and Christine Thieman migrated from the suburbs to Downtown when their youngest child went to college about three years ago.

That year, for the first time in more than 90 years, the nation’s biggest cities, including Pittsburgh, grew faster than their suburbs, according to the Brookings Institution, a Washington policy group.

The trend continued in each of the past two years, though growth rates for cities and suburbs hover around 1 percent and the gap between them is narrowing, Brookings reported in May.

But the population living Downtown has soared. Census data show the area was home to 12,343 people last year, up 10.5 percent from 2010.

PLAINS TOWNSHIP, PA — More people are moving into the region than leaving.

Migration into Luzerne and Lackawanna counties is on the rise and much of the immigration is coming from New York, New Jersey and elsewhere in Pennsylvania, according to the 2014 Indicators Report from the Institute for Public Policy and Economic Development at Wilkes University.

The report, unveiled Thursday morning to business and civic leaders who filled the convention center at Mohegan Sun at Pocono Downs, analyzed 120 indicators in areas such as demographics, population and migration, jobs and the economy. It was the ninth year for the event, said Teri Ooms, executive director of the institute.

Ooms highlighted the 2010 Census, which shows a growing population for the first time since the 1950s. Some are from the low- to moderate-income demographic and some earn a middle- to upper-middle income, the report showed. Slow and steady wins the race: It works for the tortoise, and it seems to be working for Pittsburgh.

The latest annual “Pittsburgh Today and Tomorrow” report by PittsburghTODAY found that Pittsburgh continues to make modest economic progress after years of decline.

PittsburghTODAY is a nonprofit part of the University of Pittsburgh’s University Center for Social & Urban Research that tracks the region’s progress compared with 15 other areas of similar size, geographic and demographic makeups.