Blue Bell, PA —Montgomery County Community College (MCCC) celebrated the success of 1,555 graduates during its 2016 Commencement ceremony on May 19 in Blue Bell.

Ranging in age from 18-70, from 11 countries throughout the world, graduating with 1,597 degrees and certificates in more than 30 areas of study—the class of 2016 reflects the diversity of MCCC’s student body.

“You are a remarkably diverse, committed group of students. All of you share an unquenchable determination and hunger for learning,” MCCC President Dr. Kevin Pollock told the graduates during his welcome.

Dr. Pollock also shared a statistic of which he is particularly proud.

“This year, our student body, including many graduates here tonight, logged over 20,000 hours of community service, making a difference on our campuses and in the community,” he said. “Don’t ever lose your drive to improve the world. You will make a difference.”

The theme of opening doors and seizing opportunities carried throughout the evening’s speeches.

“Tonight, I will share three important lessons with you: look for opportunity in every situation; don’t give up; and make a difference,” said PECO President and CEO Craig L. Adams, who provided the keynote address. “There is always a way.”

Adams shared his own educational journey, which, like MCCC’s graduates, started at a community college.

“When I was young, I didn’t think I’d have the change to go to college—but there was a way,” he said. “You will encounter many barriers. Don’t let then stop you from doing what you want to do.”

JACQUELINE RAMOS: Jacqueline Ramos, Hatfield, provided the student address at Montgomery County Community College’s 49th Commencement ceremony on May 19, 2016. She graduated with an A.A.S. in Baking and Pastry Arts and a Certificate in Culinary Arts. Photo by John Welsh

A highlight of the evening was the student address, given by 2016 MCCC Culinary Arts Institute graduate Jacqueline Ramos, of Hatfield.

Ramos passionately shared her experiences as a student, drawing laughter when she recalled Lecturer and Chef Julia Quay creating a ServSafe version of Justin Timberlake’s song “Suit and Tie” to teach the students about foodborne illnesses.

“Never did I feel such a part of my school as I do here. Thanks to Montco and the Culinary Arts Institute, I became part of a family,” she said.

Ramos, who graduated with an Associate in Applied Science (A.A.S) in Baking and Pastry Arts and a Certificate in Culinary Arts, also encouraged graduates to be open to new opportunities.

“Regardless of why we enrolled in that first class at Montgomery County Community College, we opened a door! I encourage you to walk through [that door] ready to conquer the world!” she said. “Be open to opportunities and take advantage of them when they come to you. They will open even more doors and new adventures.”

In addition to serving as the evening’s Master of Ceremonies, Vice President of Academic Affairs and Provost Dr. Victoria Bastecki-Perez presented several awards for teaching excellence to MCCC faculty based on nominations by their colleagues and students.

The late Dr. Lee Bender, who passed away recently after serving MCCC for 48 years as a Professor of Economics and Dean of Business and Computer Science, was posthumously honored with the Pearlstine Award for Teaching Excellence, presented bi-annually to a full-time faculty member.

“Dr. Bender’s unparalleled 48-year tenure at the College, coupled with his commitment to lifelong learning, academic excellence and student success, were cited as clear reasons for his nomination for this award—or as one nominator called it, ‘the College’s first lifetime achievement award for excellence in teaching and excellence in administration.”

Bender’s wife, Carol Shilling, accepted the award on his behalf.

Following the conferring of degrees, Dr. Bastecki-Perez ended the evening with words of inspiration to the class of 2016.

“Ghandhi is famously quote as saying, ‘You must be the change you want to see in the world.’ Graduates, each one of you has taken a step toward being that change by investing in your education and in your future. Your vision, hard work, and perseverance will serve as an example for generations to come. I wish each and every one of you a bright future filled with happiness and success. Congratulations to the class of 2016!”

During his keynote address, Lower Moreland Township Police Sgt. David Scirrotto asked all veterans on stage and in the audience to stand and be recognized for their service in honor of Veterans Day.
Photos by Sandi Yanisko

Teamwork and service were themes of the evening, starting with class 1502 valedictorian, Cadet Brian Colucci, of Plymouth Meeting, during his address.

“What I admired most about our class is that there’s more than just one leader. I knew if we worked together, this team could reach its goal. Keeping together as a team leads to success,” he said.

Selected by the class to provide the evening’s keynote address, Lower Moreland Township Police Sgt. David Scirrotto shared stories of the cadets during their time at the academy, especially time spent under his instruction.

“Every day I spend with them, I become a better officer and man. These men and women should remind us every day why we put on this uniform,” he shared.

An alumnus of the academy himself, Scirrotto added, “I can only hope to be as positive a role to these cadets as the academy’s instructors were to me.”

For their service project, cadets collected food and monetary donations for Advocates Against Hunger, which coordinates food delivery and education efforts with a number of soup kitchens and food pantries in the Norristown region. Kary LaFors, director of the Community Interfaith Food Pantry at Grace Lutheran Church, was on hand to accept the donations on behalf of Advocates Against Hunger.

Municipal Police Academy Director Jude McKenna presented a series of awards as part of the ceremony. Cadet SSgt. Jeffrey Wagner, of Levittown, received the Platoon Leader Award of Merit. Cadet Michael Aluise, of Warwick, received the James R. Miller Marksmanship Award, presented in memory of Upper Dublin Police Sergeant Jim Miller, who died in an automobile accident while on duty in 2004. The Award of Distinction, given to cadets who demonstrate exemplary dedication and teamwork, went to Cadet James Garrity, of Wayne.

“There are no police officers trained better than they are in Montgomery County. We’re exceptionally proud of the work we do, not only with our Act 120 training, but also with our associate’s degree programs in Criminal Justice,” shared Castor, noting that he will retire from public service in December after a 30-year career.

The academy has been the training ground for more than 3,600 cadets with a consistent graduation rate of more than 90 percent. The curriculum allows successful students to articulate up to 15 credit hours toward an associate’s degree in Criminal Justice Studies at MCCC. 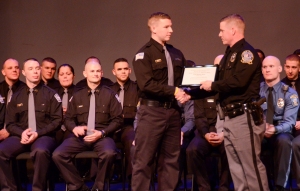 During the ceremony, Cadet Sarah Couch, Royersford, presented Frei and attorney Skip Persick, who oversees the trust, with a check for $3,000. According to Persick, the money will ultimately be used for McMillian’s education expenses to “create a career for this young man.”

Parkesburg Borough Police Department Chief Brian Sheller was selected by class 1404 to give the keynote address, during which challenged the cadets to “make a difference” in the communities they serve.

“Police are many things to many people in their times of need. Treat everyone with dignity and respect,” shared Sheller, who is also an instructor at the Academy.

Earning the highest GPA in his class, Cadet James Reilly, Chalfont, offered remarks on behalf of the graduates. He described impact of the moment when, as a group, the cadets’ focus shifted from individual success to class success.

“It was about being better as a class, and successful as a class,” he shared, before thanking the academy’s leadership, faculty, family and friends for their support.

Interim Municipal Police Academy Director Jude McKenna presented a series of awards as part of the ceremony. Cadet Lt. Brian Manion, Conshohocken, received the Platoon Leader Award of Merit. Cadet Tori Adams, Langhorne, received the James R. Miller Marksmanship Award, presented in memory of Upper Dublin Police Sergeant Jim Miller, who died in an automobile accident while on duty in 2004. And the Award of Distinction, given to a cadet who demonstrates exemplary dedication and teamwork, went to Cadet Cpl. Amal Yasin, Philadelphia.

The academy has been the training ground for more than 3,500 cadets with a consistent graduation rate of more than 90 percent. The 800-hour curriculum allows successful students to articulate up to 15 credit hours toward an associate’s degree in Criminal Justice Studies. 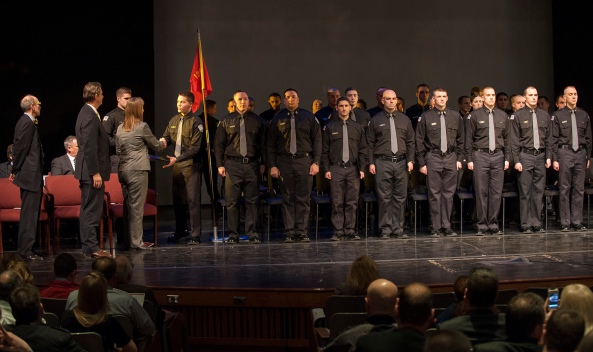 Patrol Commander Darren Nyce from Upper Dublin Township Police Department was selected by class 1304 to give the keynote address, during which he stressed the importance of preparation.

“Prepare for opportunity, [so that you’re] ready for opportunity when it comes. Being prepared to do the right thing at the right moment takes tremendous heart, courage and perseverance, and, at times, great sacrifice,” shared Nyce, who is an alumnus of the Academy as well as an instructor.

Earning the highest GPA in his class, Cadet Cpl. Jason Kesack, Lansdale, offered remarks on behalf of the graduates.

“I think love is probably the most important thing, not only in police work but in life in general,” he shared. “It’s about community policing and how you interact with the people around you. Everyone is someone’s mother, someone’s brother. I think it’s important that we remember that golden rule—that we should treat people the way we would want our families treated.”

Williar also presented the Director’s Spirit of Distinction Award to Cadet Cpl. James Apgar, Frenchtown, N.J., adding that the award goes to “the MVP of the group; to an individual whose personality is instrumental in making the class what it is.”

Stevens presented the James R. Miller Marksmanship Award to Eric Meoli, Lansdale. The award is presented in memory of Upper Dublin Police Sergeant Jim Miller, who died in an automobile accident while on duty in 2004. 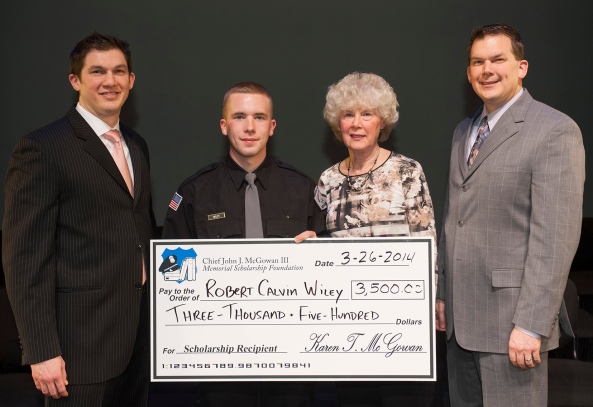 During the ceremony, members of the McGowan family—Karen and her sons Scott and John McGowan IV, presented the Chief John J. McGowan III Memorial Scholarship in the amount of $3,500 to Robert Calvin Wiley, Willow Grove. The scholarship honors the late East Norriton Police Chief John McGowan, who died in a motorcycle accident in 2010. Wiley thanked the McGowan family for the honor, adding that he will use the scholarship to continue his education in MCCC’s Criminal Justice program in the fall.

The academy has been the training ground for approximately 3,500 cadets with a consistent graduation rate of more than 90 percent. The 800-hour curriculum allows successful students to articulate up to 15 credit hours toward an associate’s degree in Criminal Justice Studies.