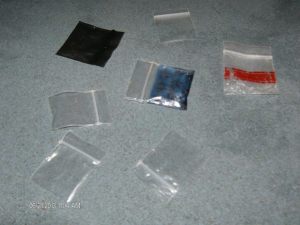 This is a picture of drug baggies that were collected in the 400 block of King Street this morning, Sunday, June 23, 2013, by a homeowner and taxpayer.  This is an everyday occurrence for people who live in the core neighborhood in Pottstown.  Does this not look like a problem!?!  One day, one block, seven baggies.

Drugs lead to crime and violence; burglaries, shootings and stabbings, oh my!  How does allowing this problem to continue help Pottstown?  Why does the leadership sit idly by and watch Pottstown deteriorate?  The crime rate is astronomical.

Why isn’t Pottstown aligning itself with the Berks County drug summit initiative?  If you listen to certain people, they will tell you Pottstown’s drug problems are because of Reading and Philadelphia.  I am sure that is a big part of the problem.  I bet if somebody in authority reached out to Berks County and explained what’s going on in Pottstown they might allow you to be part of the group, being so close to the Berks County line.

If you listen to others, like Mayor Bonnie Heath, they are in complete denial that Pottstown has problems.  If you try and point out the problems you are labeled a malcontent activist.  Being a cheerleader for the borough is one thing, being in complete denial is quite another.  Bonnie oversees the police department and wants a second term as Mayor of Pottstown.  The queen of obfuscation wants your vote in November.

They say a picture is worth a thousand words.  Just imagine how many more baggies could have been picked up this morning on the streets of Pottstown.  Houston, we have a problem.

POTTSTOWN — After 23 years on the Pottstown police force, Robert Thomas has a new position and a new office in Borough Hall.

Thomas, in a ceremony during Wednesday night’s Borough Council meeting, was promoted to the rank of captain.

His promotion comes on the heels of the promotion of his predecessor, Richard Drumheller, to police chief.

Thomas was a sergeant for 11 years and he led the detectives unit.

Editor’s note: While we applaud any momentum to reduce the crime rate in Pottstown…at the rate of 1 to 2 percent per year it will take decades before the crime rate in Pottstown is below the national average.  Maybe some “sweeping changes” are desperately needed!  Pottstown needs a new mayor and a new borough council.  Check out the Reform Party candidates as alternatives to the same old, same old, good old boy network candidates.  You see how that’s working out.

“At first I was nervous, now I’m excited,” Drumheller told his new boss, Mayor Bonnie Heath, after the council meeting.

Drumheller told The Mercury he does not plan any immediate “sweeping changes” to department operations, but that he does have plans to improve the borough’s policing over time and he would like to set a goal of driving down the borough’s crime rate by 1 to 2 percent in a year.

Most significant of the changes he plans, he said, is a greater use of crime data to drive policing efforts.
Read more:  http://www.pottsmerc.com/article/20130408/NEWS01/130409346/new-pottstown-chief-aims-for-crime-rate-reduction