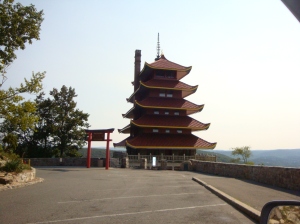 Mayor Vaughn D. Spencer said he doesn’t want to be remembered as the man who was mayor when the Pagoda tumbled down Mount Penn into City Park.

But among the myriad financial problems the city faces is the fact that a section of the retaining wall supporting the foundation of the city landmark has collapsed, and more of the wall is in danger of crumbling.

If the wall goes, the Pagoda could be next.

“It’s a serious problem because that is the foundation wall and a large piece of it is gone,” Spencer said. “Once you get that kind of erosion going it’s hard to stop.”

WILKES-BARRE, PA — At some point something has to be done with the Irem Temple, and Rick Williams and others hope it’s not torn down like the nearby Hotel Sterling.

Last week demolition crews razed a good portion of the rear of the hotel.

They’re moving to the North River Street side today to continue to reduce the landmark structure to rubble.  The hotel opened in 1898, and nine years later, the temple, designed in Moorish revival architecture complete with four minarets and dome, was completed on North Franklin Street.

Like the hotel, it’s been vacant for years, and architect Rick Williams fears its brick walls could be bashed to pieces by the steel buckets and blades of excavators, like those leveling the hotel.

Today, the once-grand building has fallen into disrepair and has no heat, lights or electricity.  But city and chamber officials are trying to save it.

During a tour by flashlight Wednesday, Ross Macarty, vice president of community development, real estate and special projects for the Greater Wilkes-Barre Chamber of Business and Industry, showed that water damage has taken a toll on the deteriorating building and thieves have stolen copper and brass inside over the past two months.