According to the Chamber, the award is presented to businesses that are taking a “green” proactive approach for a more sustainable business environment. MCCC is the fourth environmental award recipient since 2009.

Guided by a Climate Commitment Action Plan and Advisory Council, MCCC is working toward the goal of carbon neutrality by 2050—a pledge made in 2007 as a charter signatory of the American College & University Presidents’ Climate Commitment. Areas of focus include education, transportation, energy, facilities and overall best practices.

While many of MCCC’s sustainability initiatives are implemented across all locations, the College’s West Campus in Pottstown boasts several unique—and visible—green elements, namely wind turbines and a green roof.

In April, the College installed four 25-foot vertical axis wind turbines outside its Schuylkill Riverfront Academic and Heritage Center at 140 College Drive, adjacent to Riverfront Park and the Schuylkill River. Each turbine produces 1,000 watts of energy, for a combined 4,000 watts—enough energy to power the parking lot LED lighting. More importantly, the turbines are providing real world teaching and learning opportunities for students and faculty around alternative energy.

The wind turbines at West Campus, along with solar panels at the College’s Central Campus in Blue Bell, are part of a Guaranteed Energy Services Agreement with Siemens Industry Inc. Collectively, through a broad series of self-funded energy conservation projects, MCCC will see 19 percent energy savings—and more than $6 million in cost savings—over the next 15 years. 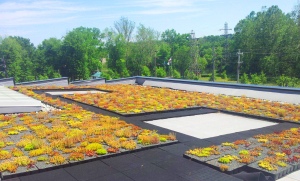 The West Campus’ Schuylkill Riverfront Academic and Heritage Center also features the College’s first and only green roof. Installed in 2011, the roof features 13 different varieties of plants that were selected specifically for their growth, strength, and absorptions properties.

The plants help to reduce the amount of rainwater that goes into the storm system, thus protecting the surrounding waterways from excessive runoff. When saturated the plants absorb CO2 and release oxygen, thus helping the College advance toward its goal of carbon neutrality.

In addition to the wind turbines and green roof, West Campus sustainability highlights include two 240-volt electric vehicle charging stations in partnership with ECOtality, a recognized leader in the research and development of advanced energy systems specializing in alternative fuel campuses; a Segway program for Public Safety officers; and an increased emphasis on bicycle accessibility

To learn more about the College’s Sustainability Initiative, visit http://www.mc3green.wordpress.com.

FLORENCE, S.C. (AP) — If agave, yucca and asparagus plants slowly waking up from winter atop the facilities building at the Moore Farms Botanical Gardens building in Lake City had faces — you know, like those pansies and roses in “Alice in Wonderland” — they’d doubtless be full of surprise and wonder.

Which would make them a perfect match for looks they receive from the people down below.

Plants on the roof? A gable garden? What the heck is going on?

The 6,000-square foot green roof at the Moore facility, the garden center built by Lake City philanthropist Darla Moore last January.  It is one of a handful of new “green roofs” that are springing up in the Pee Dee.  They are part of a national experiment in green building design.  The roofs can save money and help mitigate environmental impact by cutting down on energy use and mitigating storm water runoff.

The J.L. McMillan Federal Building in Florence and the McNair Science Building at Francis Marion University are also experimenting with green roofs.