RENOVO, PA – The Renovo Police Department came under fire at this week’s borough council meeting, with citizens charging that there’s a lack of accountability and job performance among officers.

The Wednesday night session became a sounding board for a group of about 20 mostly long-term Renovo residents who believe the department is not doing its job properly, and council is not providing sufficient oversight.

The complaints also come just months after South Renovo Borough dropped shared police coverage by the Renovo officers, saying they didn’t believe the neighboring borough just across the West Branch of the Susquehanna River was getting its money’s worth.

A small Cessna aircraft crashed on the final approach into William T. Piper Memorial Airport in Lock Haven on Monday.  The single engine plane clipped a telephone pole, stuck a house and three parked vehicles on East Church Street before bursting into flames and killing all three people on board.

No one on the ground was injured although the couple who own the home were in the house when the plane hit.  This neighborhood is full of young children who were home at the time.

Witnesses say they heard the plane’s engine cut out as the aircraft passed over the Lock Haven McDonald’s.  The plane didn’t have the altitude to safely glide to the airport and crashed one block short of the runway.  The pilot radioed the airport asking if fuel was available a few minutes before the crash.

Ironically, the airport had just hosted its 25th annual Sentimental Journey Fly-In that weekend, safely attracting 400 planes and 4,000 people.  This crash was not associated with the Fly-In.

The City of Lock Haven is the former home of Piper Aircraft Corporation and for 70 years Piper aircraft were manufactured there.  The Fly-In brings Piper owners back to Lock Haven each year.  On the grounds of the airport is the Piper Aviation Museum. 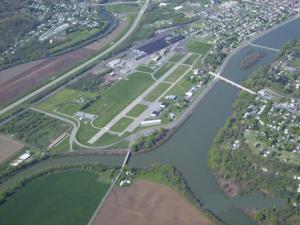