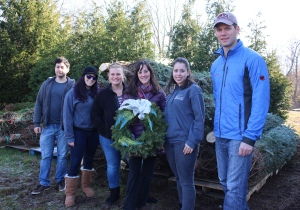 The Student Nurses Club raised $600 for this year’s 25-tree donation, bringing the total number of trees it donated over the past four years to 100. The club raised money by selling raffle baskets on and off campus, with 100 percent of the proceeds benefiting Trees for Troops.

“The student nurses, like most of our population, have come to a greater realization of the sacrifices those in the armed forces make. Through our participation in Trees for Troops, via the association with Bustard’s Christmas Trees, the students feel they are assisting the families of individual service members,” explained Connie Fiorentino, assistant professor of nursing and SNC faculty advisor at MCCC.

After the first year of tagging and donating the trees themselves, the student nurses have since invited MCCC’s student veterans to join them, building an important connection between the two groups and the national movement.

“Trees for Troops is a well-attended event by both the student nurses and student veterans because there is a direct personal connection. They feel there is something very special about this event. When they personally tag a tree, they know they are doing so for a family who may suffer the loss of their service member during the holiday season. The students are proud of their part in assisting these service families,” shared Fiorentino.

The relationship forged with Bustard’s Christmas Trees over the past several years earned MCCC nursing and veterans students an invite to a special press event in September when White House officials selected the 2015 White House Christmas tree at Bustard’s farm in Lehighton, Pa.

For MCCC’s Nursing program, Trees for Troops aligns with its participation in other veterans causes, such as the Wounded Warrior Project and Joining Forces. Over the past several years, the Student Nurses Club raised over $3,000 for Lansdale’s Hometown Hero Walk and sponsored donation drives for personal care items that were delivered to military troops stationed abroad and to the Veteran’s Center of Montgomery County.

Trees for Troops was launched by the Christmas SPIRIT Foundation in 2005. Since then, more than 157,000 real trees have been delivered to military families at 60-plus bases throughout the United States and overseas. Trees are contributed by Bustard’s and about 30 other Christmas tree growers and retail lots in the U.S. To learn more, visit http://www.treesfortroops.org.