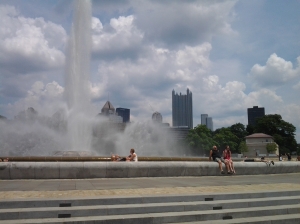 Oxford Development Co. is pitching a revised plan for a new office tower Downtown — 20 stories instead of 33 with a soaring 18-foot-high lobby and a host of eco-friendly features.

Dubbed 350 Fifth, the new high-rise would be built on the west side of Smithfield Street between Forbes and Fifth avenues, replacing an existing Oxford-owned building, which would be demolished.

For two years, the developer has been debating whether to renovate the nearly vacant building at 441 Smithfield at a cost of $40 million or build a new 33-story high-rise at the site. But it was unable to secure the anchor tenant needed to make the latter work.

Wanting to leave its own imprint on Downtown’s resurgence, it has now settled on a third option — a striking 20-story glass and aluminum tower envisioned for multiple tenants.