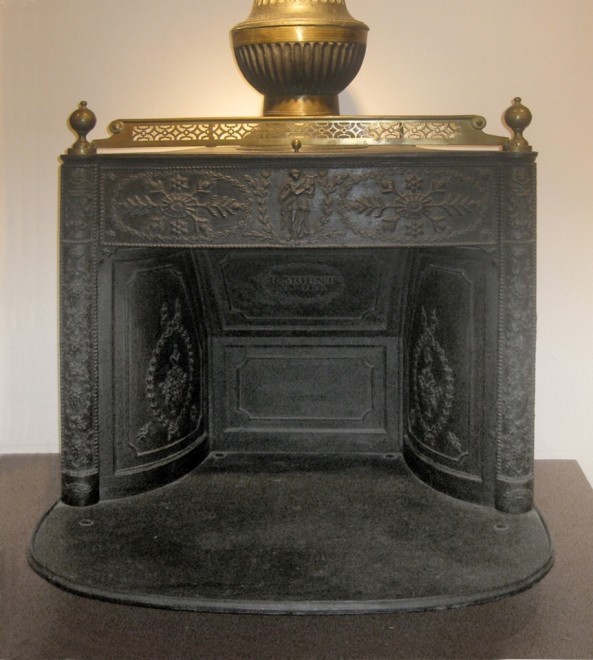 In 1715, a Germantown blacksmith named Thomas Rutter built the first ironwork in the colony of Pennsylvania along the Manatawny Creek, setting the stage for the development of an ironworking empire in the region.  John Potts’ father, Thomas, entered into business with Rutter in 1725, and the next few generations of their families came to dominate the colonial iron industry through technical skill, business acumen, and profitable marriages.  In the exhibit “Forging a Lifestyle: Ironworking with the Potts Family,” the ins and outs of the early iron industry will be explored, from the physical work that was involved—mining, making charcoal, powering the forges and furnaces—to the business decisions that were made by those who owned and ran the ironworks, like the Potts, Rutter, Nutt, and Savage families.

The exhibit will kick off with Dan Graham’s lecture: “Colonial Pennsylvania Cast Iron Fire Backs, Stove Plates, and Warming Stoves, 1726-1760.”  Graham has done extensive research on the Potts and Rutter families and the early Pennsylvania iron industry.  His talk will focus on two of the products that came out of the early Pennsylvania iron furnaces, fire backs and stoves.  He will trace the development of stoves from the simple five-plate jamb stove to the elaborate ten-plate cooking stoves and the Franklin stove.  After the lecture, guided tours of the new iron exhibit will be offered.

The exhibit is open to all ages and can be viewed on a guided tour of Pottsgrove Manor during the museum’s regular hours between March 9, 2013 and November 3, 2013.  There is a suggested donation of $2 per person for the tour.

Pottsgrove Manor, home of John Potts, colonial ironmaster and founder of Pottstown, is located at 100 West King Street near the intersection of King Street and Route 100, just off Route 422, in Pottstown, Pennsylvania. Pottsgrove Manor is operated by Montgomery County under the direction of the Parks and Heritage Services Division of the Assets and Infrastructure Department.

Regular museum hours are Tuesday to Saturday from 10:00am to 4:00pm and Sunday from 1:00pm to 4:00pm.  Tours are given on the hour.  The last tour of the day begins as 3:00pm.  Groups of ten or more should pre-register by calling 610-326-4014.  For more information and a full calendar of events, please visit the website at: http://historicsites.montcopa.org/pottsgrovemanor or like Pottsgrove Manor on Facebook at: http://www.facebook.com/PottsgroveManor.

HAZLETON – Scores of police officers scoured a neighborhood in the Alter Street business district with guns drawn Wednesday morning after the rear window of an unmarked police vehicle “exploded” when it was shot with something while a Hazleton detective sat inside.

He said the unmarked vehicle was parked at Fourth and Alter streets about 11:45 a.m. when the window “exploded as if shot out,” blowing “90 percent” of the glass inside the vehicle.

“It was shot with something. I’m just not sure what caliber, if it was a BB from a passing motorist,” Chief DeAndrea said.

Wednesday night, he was a no-show at a candidates’ night at Perry Traditional Academy in his North Side political base, and a public explanation from his close friend, Kevin Quigley, only added to the uncertainty created by his absences.

Just after city Controller Michael Lamb, one of Mr. Ravenstahl’s rivals for the Democratic nomination for mayor, spoke to Democratic committee members, Mr. Quigley, a city Public Works Department official who is also a ward leader, rose to speak in Mr. Ravenstahl’s place.

He offered an intriguing but finally opaque apology and explanation for the candidate’s absence:

The state Public Utility Commission really wants electric users to switch from their utility to one of the dozens of alternative suppliers.

PPL will cut its residential rate by 4.1 percent Friday, reflecting the cheaper prices it’s paying to obtain power on the wholesale market.

If someone asked you to name the nation’s five best toy stores, it’s doubtful that The Fun-est Toy Store Ever would make the list.

According to the tourist-friendly travel website, Rates To Go, the Ephrata toy shop at 24 E. Main St., is one of America’s top five toy stores.  That puts the store up alongside the enormous Toys R Us in New York’s Times Square, Ambassador Toys in San Francisco, the huge LEGO Store in Chicago, and the world famous FAO Schwarz, where actor Tom Hanks danced on the gigantic floor piano in the movie “Big.”

“I was shocked,” store owner Melissa Palermo-Spero said when asked her reaction to the news. “I don’t know how we came to being put in the same category as some of these really large, well-known, iconic toy stores.”

Meteorologists are watching a low pressure system with the potential to bring a major winter storm with blizzard conditions next week to the mid-Atlantic, including the Lehigh Valley.

But don’t go altering travel plans just yet, because it also could just blow out to sea.

AccuWeather, a private forecasting company in State College, says there are indications the jet stream next week could form into an upward loop, similar to a an upside “U” or the Greek letter omega, and drop an “atmospheric bomb” on the mid-Atlantic.

AccuWeather.com’s expert senior meteorologist Alex Sosnowski says the system could bring “a foot or more of wind swept snow, travel mayhem, power outages and the whole nine yards with a storm hugging the coast.  Or, he says, it could just turn into “another non-event with the storm heading out to sea.”

POTTSTOWN — During the first joint meeting of the year between borough council and the Pottstown School Board, discussion was free-flowing and frequent.

Perhaps highest on the list, and the subject which generated the most focused conversation, had to do with a business that wants to occupy the former 84 Lumber truss plant at the end of Keystone Boulevard.

Steve Bamford, the director of Pottstown Area Industrial Development Inc. and the borough’s chief economic development officer, gave for the third time, an overview of the Keystone Opportunity Zone program and the request from Heritage Coach Co. to occupy some of the space there.

Sellers of hearses and limousines, Heritage began as a side business for the Lankford family, which also operated a GM dealership in Conshohocken that was shut down during what Jay Lankford, a Hill School graduate, called GM’s “political sham of a bankruptcy.”

WEST CHESTER — Two weeks after the grisly discovery of a body inside a burning North Coventry apartment, authorities announced an arrest in the murder of 17-year-old Kevin Allen.

Shakeem Carter, 20, of Norristown, was arraigned Wednesday morning after an investigation concluded he was responsible for the brutal stabbing death of the Norristown High School student inside his father’s home at the Hanover Garden Apartments, officials said.

Allen’s body was discovered on Feb. 12 after a neighbor dialed 911 to report a “terrible struggle,” according to Chester County District Attorney Tom Hogan, who announced Carter’s arrest at a Wednesday morning new conference.

Officers from the North Coventry Police Department were the first to enter the apartment, but they had to retreat when they discovered the apartment was on fire.  Firefighters were able to extinguish the flames, but when they returned, they told police there was a body inside.

Editor’s note:  We think this is a bad idea…just sayin’.

West Reading’s fired Police Chief Edward C. Fabriziani will return to the force as a patrolman in a deal being ironed out by borough officials, borough sources said.

Fabriziani, who was fired in November, is listed on the patrol schedule starting in April to cover other officers’ vacations, according to borough sources.

Borough council is expected to vote on the matter either at its regular March meeting or at a special meeting.