Allentown, Pa. (Sept. 23, 2011)—Muhlenberg College will present the world premiere of five new short plays by emerging playwrights, during the Theatre & Dance Department’s “New Voices” festival, Oct. 1-5. The department produces a “New Voices” festival every other year as part of its mainstage season.

“‘New Voices’ is an opportunity for audiences to see some provocative new plays for the first time anywhere, by very talented young writers,” says Charles Richter, Muhlenberg’s director of theater and the artistic director of the festival. “It has great ‘I was there when’ potential for the audience—that 20 years down the road, they’ll be able to say they saw a prominent playwright’s very first produced play.”

The evening of one-acts is about two hours long, including intermission. It will be presented for six performances in Muhlenberg’s intimate 100-seat Studio Theatre. The evening includes plays ranging in subject matter from a dramatic crisis at the family dinner table to a bizarre business meeting.

Zach Trebino’s “…continuance…” explores the mother-son dynamic in an innovative, often-surreal piece, in which the characters act out a pivotal event from earlier in the mother’s life.

“A lot of my work is word-based; it’s an artistic experiment,” says Trebino, a 2011 graduate whose last project at Muhlenberg was directing last season’s mainstage production “Polaroid Stories. “I wrote the actual story that is being told by the mother first, and then about a year later added on the extra role-playing layer.”

Directing “…continuance…” is another returning alum, Vanessa Lancellotti, a 2010 graduate. In December, Lancellotti founded Punch Theatre, a physical theater company influenced by the commedia dell’arte performance style. With Punch, she has directed two original productions in the spring and summer of 2011: “The Skin You Leave Behind,” in New York, and “Architecture,” performed in New York and at the CrisisArt Festival in Tuscany, Italy.

“This is a great opportunity to come back to Muhlenberg and work with the next generation of students,” Lancellotti says. “I’m used to having to do everything myself with Punch, and it’s a luxury to be working with a great team.”

To me, this play says a lot about the amount of energy we put into self-construction,” he says. “I think it prevents us from forming actual connections. We spend a lot of time thinking about ourselves in a bubble, hyper-self-conscious about who we are and how we come off.”

Shannon Leigh Wittenberger’s “Transcranium,” directed by Danielle Barlow ’13, examines relationships—but from inside the befuddled head of its protagonist. Either her boyfriend is real, and her psychiatrist is imaginary, or it’s the other way around. Or maybe neither one is real.

“There was this TV commercial, with a therapist talking to a patient about a giant imaginary pizza oven,” Wittenberg ’11 says. “The shrink says, ‘You know the pizza oven’s not real,’ and I started thinking, what if he responds, ‘The pizza oven says you’re not real.’ That was the starting point. The pizza oven turned into a boyfriend, of course.”

Eliana Sagarin’s “Fast,” directed by Amanda Lenti ’12, offers a retrospective of a friendship between two teenage boys, who turn out to be very different from one another.

“The play is a journey to unearth the ties that bind us to the people we care about,” Sagarin ’14 says. “I think Muhlenberg celebrates risks. In this festival, the diversity is so apparent and each play takes a risk in a different way.”

Kate Brenner’s “You Understand,” directed by Richter, depicts a modern family that rapidly unravels one night over the course of dinner—and the aftermath of the unraveling.

“I wanted the audience to ask questions about what should happen when things don’t go as planned,” Brenner ’13 says. “What lengths do people go to, to preserve their status quo?”

In addition to the five fully produced plays, the festival will feature staged readings of four other short plays, in a free performance Oct. 2 and 5 in the Baker Center for the Arts Recital Hall. The readings are directed by Bill Mutimer and feature the work of Dan Brennan ’11, Leah Holleran ’12, Josh Shapiro ’13, and Aly Trombitas ’14.

Muhlenberg College is a liberal arts college of 2,200 students in Allentown, Pa. The college offers Bachelor of Arts degrees in theater and dance. The Princeton Review ranks Muhlenberg’s production program first in the nation, and the Fiske Guide to Colleges lists both the theater and dance programs among the top small college programs in the United States.

“New Voices” performances are Saturday through Wednesday, Oct. 1-5, at 8 p.m., as well as Sunday, Oct. 2, at 2 p.m. Tickets are $15 for adults and $8 for patrons 17 and under. Performances are in the Studio Theatre, Trexler Pavilion for Theatre and Dance, Muhlenberg College, 2400 Chew St., Allentown.

The “New Voices” Staged Readings performance is Sunday, Oct. 2, at 5 p.m., and Wednesday, Oct. 5, at 8 p.m., in the Recital Hall, Baker Center for the Arts. Admission is free, and tickets are not required.

“New Voices” is for mature audiences. Performance information and tickets are available at 484-664-3333 or www.muhlenberg.edu/theatre.

Great article from the Pittsburgh Post-Gazette about the filming of Abduction, which opens in theaters today.  The movie filmed in Greater Pittsburgh for 51 days and stars Taylor Lautner from Twilight.  The movie includes scenes from around Pittsburgh and even Fiddle’s Diner in Brownsville, Fayette County.  The Pittsburgh area is becoming an increasingly popular location for Hollywood film makers along with other areas of Pennsylvania.

Like Lancaster, the Lehigh Valley does not have good air quality.  The Lehigh Valley was rated 13th on the list of smoggiest mid-sized metropolitan areas in the nation.  Lancaster was ranked 10th.

Pennsylvania ranks as the sixth smoggiest state in the U.S.  Air pollution is linked to respiratory problems such as asthma and allergies.

I watched the X Factor last night and throughly enjoyed it.  I miss Simon and Paula on Idol.  I do enjoy Jennifer and Steven as Idol judges, so no offense to them.

Simon seemed a little kinder and Paula was very lucid.  The addition of L.A. Reid as a judge is great.  Nicole I can take or leave.  I never thought I would say this but Ryan Seacrest is a better host than whoever they have on X Factor.

I am looking forward to next week already!  I want more! 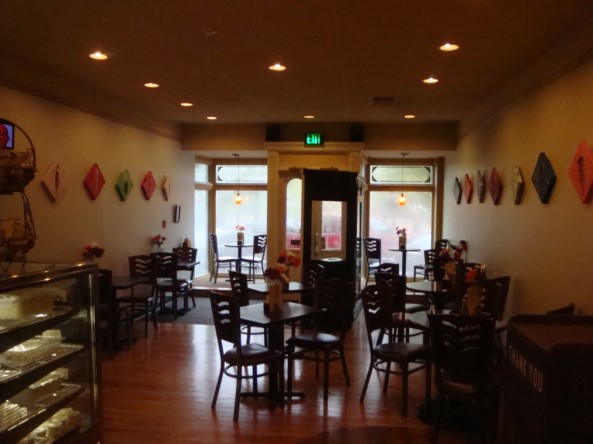 As promised, I visited Bistro 137 on High Street in downtown Pottstown for breakfast this morning.  I have some interior shots for you and a review of breakfast.

When my breakfast companion and I entered the restaurant we were cheerfully greeted by what appeared to be the owner and two young women who were servers.  We were the only customers for a little while but while we were there 4-5 people came in and ordered breakfast to go.

The interior has been redone.  It is bright and cheerful, yet tasteful.  The menu gives diners a nice selection without overwhelming them with too many choices.

My friend ordered coffee and I ordered hot tea.  Coffee and tea come in three sizes, small, medium and large.  We both ordered a medium, which is a nice size.  My friend likes a good cup of coffee.  Her rating on the coffee was excellent (and she has high standards).

A wooden box was brought to the table and I was allowed to choose my tea from at least a dozen flavors.  Since it was breakfast, I stuck with good old Lipton.  Sweeteners are on the table.  Skim milk, whole milk and half and half are available for those who like a little cow with their beverage.  Hot drinks come in paper cups like at Wawa, with a cozy to keep your hand from getting too hot and a lid.  This is nice if you don’t finish your beverage; you can walk right out the door with it.  Mediums are $1.85.

My friend’s American omelet was filled with American cheese and bacon.  She thoroughly enjoyed it!  It appeared to have a decent amount of bacon in it.  The omelets were the same size, so their portion control is consistent.  She had the same basil roll and enjoyed it as well.

The atmosphere is casual, comfortable and we enjoyed a nice conversation about movies while we were there.  Good place to grab a bite with family or friends and relax.  Prices won’t kill your budget either.  The omelets were $4.50 each.  Our total bill, including drinks and tax was $13.46

We give two Roy’s Rants thumbs up to Bistro 137.  We plan on making a return trip to review their lunch menu. 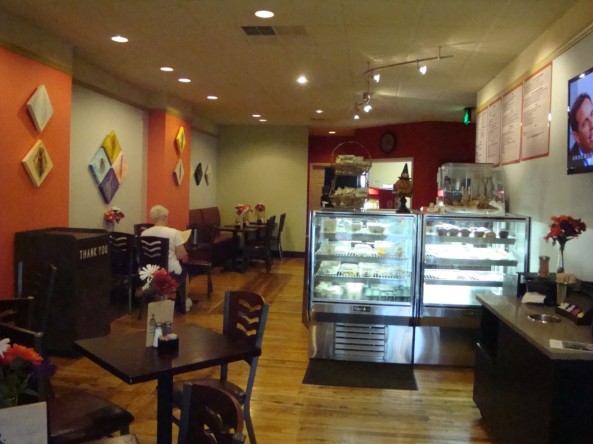